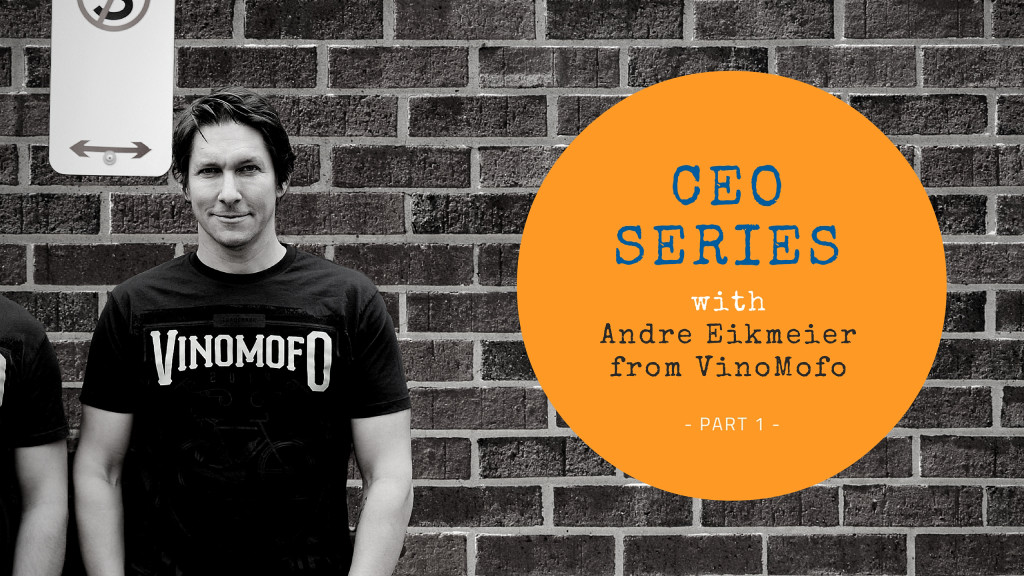 Welcome to the CEO Series! In weeks to come we’ll  be interviewing professional CEO’s to learn the ins and outs of building a successful brand and business. Here at Milk It we believe in learning from experience and example and what better example is there than someone that has already walked the path you’re going down.

Andre is a man who needs no introduction but I’m going to give him one anyway! Andre Eikmeier, self-confessed wine geek, is the co-founder of the Aussie start-up VinoMofo.  Andre and his co-founder Justin Dry were fed up with the “conservative elitist” vibe of the wine industry and decided they wanted to do something about it. With a niche audience of young wine-lovers who felt the same way, VinoMofo rose to success winning several awards including; top place at Deloitte’s Technology Fast 50 Awards, Telstra’s Business of the Year (VIC) and three awards at the 2015 Online Retailer awards, including the ultimate Online Retailer of the Year Award.

The 2016 Telstra VIC Business of the Year is @Vinomofo #TelstraBizAwards Cheers to you & your tribe of vino lovers! pic.twitter.com/0qLGpGDgQn

Not stopping anytime soon VinoMofo is in the process of expanding globally, recently landing a $25 million financing deal that will fund expansion into New Zealand, USA, UK, Singapore, Hong Kong and China. This interview was recorded a year ago at the 2015 Online Retailer Awards.

From Wine Guys to Wise Guys, tell me about the early days of VinoMofo and how you came up with the business model?

Justin and I started a business back in 2007, which wasn’t Vinomofo, in our garage. We were like wine is so bulls**t, it’s elitist and I think there’s just this encouraged fear. So many people are uncomfortable with a wine-list or to walk into a wine store and that was bulls**t, it shouldn’t be like that.

We just want to be young and enjoy wine! We found that a lot of people, particularly our generation (Gen X and Gen Y) felt the same way. So they came on board and this tribe (following) sorta built itself.

We just want to be young and enjoy wine!” Lessons from VinoMofo CEO Andre Eikmeier

It was like Facebook for wine, a wine social site. But then it became all about content because we just thought wineries would pay us a lot of money to reach this audience, which they didn’t. So then we bought a comby and travelled around the country filming Road to Vino. It was just about creating stories, which was really cool and fun but once again difficult from a revenue perspective.

So after four years of that we really had our backs to the wall, financially we had invested everything and dragged our families into it. We’d been talking about the rise of group buying and deal sites that was happening in 2010 so first week back in 2011 Justin was like we need to do a wine deal site and I was like ‘that’s a terrible idea!’

We had a tribe of five to ten thousand followers who felt the same way and trusted us for recommendations on wine. I thought if we just starting selling it we would look like a sell-out. We ended up asking them and their response was like, ‘No we would love to buy wine from you, we trust you as long as you don’t sell us s**t you don’t believe in.’

We modelled it up and thought, could we create a wine deals site that wasn’t selling sh***y cheap wine? Can we even get good wines and offer them at a really sharp price? Honestly, it launched because we really needed to make money somehow and we figured the only way to make money in the wine industry was to sell wine.

We wanted to make sure we created something we would still be proud of – that shaped the culture of the proposition. We didn’t have any money. It was the relationships we formed while driving around in the comby that got us on our feet.

I think the strength of anyone starting their own business is to get on with things but you have got to look, learn and listen real fast.

You’ve gotta be realistic about what you’re doing, if it’s not getting traction take a real good hard look at it

Finding your place in the market

Listen to your customers and look at other industries. The wine industry is boring from marketing and product perspective. Wine, is awesome, but how they were marketing them was boring, wine was virtually not online. It was dominated by Woolworths and Coles and they had 90% of the industry. So we had to create a bit of a hype around it and we drew from other industries to create what we wanted to do.

That’s something to consider for anyone is trying to transform their business right? To look and model, not plagiarise and rip-off but to model what’s working somewhere else and make it your own?

At least look at elements the product, the way you treat your customers, customer experience, your messaging, your marketing endeavours, it’s your culture and the platform you create.

If the industry that you’re in in really boring then you’ve gotta look at other industries. But we did look to fashion and music, and you know what’s going on in cooler spaces that we thought delivered a good customer experience.

Yeah, that’s a good point, taking these elements from other industries that may not be directly associated with yours but find out what’s working and push towards that.

At three months in we came on the radar of Coles and Woolworths and other big distributors that dominated the wine industry, they didn’t like it one bit.

They approached [our] distributors and said ‘don’t deal with them’. So all of a sudden we were in danger of not having any wines to sell because people starting asking us to pull deals down because they just had their ear chewed off by the big guys. The big distributors were buying 99% of the producers wines so they weren’t willing to risk those relationships for little us putting in a 15 case order.

So we had to scale fast. So we looked for money and ended up doing a deal with Catch of the Day, Scoupon and Grocery run – real category leaders in online retail. We sold them a big chunk of the company just to be able to access cash and database to grow super fast. They were a smart decision because they knew retail really well, and we learnt a lot from them.

Wanting to hold onto the integrity of what you did as a boutique and having great deals great community, was it hard to make that decision to sell part of your company that you loved wholesomely to a big group?

It was, but I’m not sure we had a choice because we were in real danger of being squashed by our competitors. We needed to do something and it seemed like the best option, of the options available. Compared to Fairfax, Catch of the day had a much more synergistic culture and knows what they’re doing with retail.

They didn’t invest all this money because they wanted to tell us what to do, they invested all the money hoping we knew what to do.

Wanna hear more of Andre’s awesome story? We will be posting the second half of the interview next week. In Part 2 you will hear about the trademark issues VinoMofo faced upon launching, the process of finding what the brand stood for and Andre’s prediction for the future of business innovation in the digital environment.